It’s now 14 days since Mia was admitted to hospital and 19 days since we believe she caught the virus.

Mia has managed 2 small wee’s today which is great news in her recovery process, we have a long road ahead but each day we get one step closer to home. She has picked up a strange habit of falling asleep while sitting up and swaying from side to side. This is very strange but she gets upset if we lie her down..

A swaying sleeping baby is a very strange sight.

I managed to get a big cuddle tonight when the doctors changed over all her umbilical cords.
some good painting has been done today so not long until Mia can fill the wall with her art work.

After a very tough weekend, today has been a much better day for Mia, the dialysis has been reduced over the weekend so there are times that Mia is not fully connected to several machines in one go. Mia has had several drinks of water but unfortunately she has not managed to keep anything down.
19 days now since Mia had anything to eat or drink also 19 days since Mia has been to the toilet and 19 days since she had a bath or shower.
Today while she was off the machines Jo helped her walk to the bathroom (about 4 feet away) and Mias legs struggled to carry her own weight, when they got there Jo had a bath waiting for Mia.
Mia had a good old play in the bath while all the nurses kept hold of all her umbilical cords to stop them getting wet or contaminated.
Then the day with have waited so long for came, while in the bath Mia did a wee. This is a big moment in her recovery process, this is a sign there is some life in her kidneys. We still have a long way to go but we have a happy camp today. Let’s hope that tomorrow brings more wee. I never thought we would get so excited about Mia going to the toilet.
This week should give us a clearer view on when we might get home but so far it seems October is on the cards for a discharge date.

Today we wee’d this is a bigger mile stone than her first steps..

It’s now been 18 days since Mia contracted the virus, the first few days she seemed fine but then she started with D&V and rapidly went down hill. Jo took Mia to the Doctor who sent them straight to Stepping Hill Hospital. After a night in Stepping Hill Hospital Mia had been closely monitored and put on several machines the decision was made to transfer her to the specialist unit at Manchester Children’s hospital. The transfer was done by ambulance under blue light conditions to get her there as quickly as possible, when we arrived Mia was taken into isolation until the Doctors could work out what was wrong.

After many blood tests and much discomfort to Mia she was diagnosed with a rare type of E-coli, hemolytic uremic syndrome (HUS). Signs of HUS include decreased urination, a pale or swollen appearance, unexplained bruises, bleeding from the nose or gums, fatigue, and seizures. HUS can be life threatening and requires treatment in a hospital.

Mia was the quickly taken in for surgery to have her prepared for the machine that would keep her alive until her kidneys start to work again.

Mia has been on 24hr dialysis since arriving at Manchester Children’s Hospital after the virus caused her kidneys to fail, she has had several blood transfusions. and has several other machines to constantly monitor and care for her. The last two days she has been put onto morphine to help with the pain.

It is now 12 days since being admitted to hospital and while we all keep our hopes she will be home soon, the Doctors say it will be a few weeks yet.

All the signs say she is going in the right direction, after a very tough few days on Mia and emotionally on Jo and I we can only hope that the next few days the virus starts to slow down and Mia can fight it off.

We have received massive amounts of support and cant thank people enough.

Mia is very strong, she is very determined in everything she does, she will fight off the virus and be home before we know it.

I will try to keep everyone informed on her progress but forgive me if there are delays in me posting. 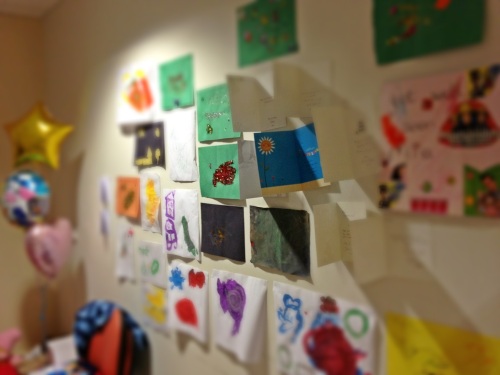 This is Mia’s painting wall, we intend to fill the wall with paintings before she comes home.

Spent most of today still at uncle Jim’s house in Nottingham. Finn my cousin has his own drum kit which he let me have a go on. I was very good at drumming and might set up my own band.

This is me drumming

This is me sat looking at the show